Join Giuseppe Nasti on a passionate exploration of this ancient form of baking, and find out the tips and tricks that will help you bake an amazing loaf at home.

With the recent boom in sour beers - and the kitchen activity of fame through COVID lockdowns - we thought it was about time to formally introduce our audience to the world of sourdough baking at home.

If you think an ear is one of those funny things on the side of your head, and an oven spring keeps the oven door closed, then you definitely need to be at this session!

Participants will receive a starter culture from Giuseppe's own house starter, a very special treat indeed.

BUY TICKET TO THIS ADJUNCT

Giuseppe was born In Trieste, Italy, on the northeast coast of the Adriatic sea.

Being born and raised by a family from Napoli, in the south of Italy, he was introduced to the culture of food at an early age. At 12 years old, he decided to learn how to cook, and he joined a private Culinary School in Friuli Venezia Giulia, the region where Giuseppe resided at that time. At the age of 14, Giuseppe started his hospitality career, aiming always to work in the best restaurants, that were at his disposal.

After over a decade of experience, In 2011, Giuseppe became the best chef in his hometown and arrived second in an event called "Emergente Nord Italia'" organised by Luigi Cremona. After these accomplishments, together with his ex-wife and children, they decided to leave Italy, in hope of a better future.

In 2012 Giuseppe’s dream of living in Australia was realised and, he settled his family in the beautiful Mornington Peninsula.   After almost 4 years working in an Italian restaurant and Hatted restaurant, he moved from Victoria, to the marvellous Adelaide. Depression attacked Giuseppe twice, in 2018 and 2021, both times there was only one thing that saved him, and it was sourdough Baking. From these 2 experiences, Giuseppe swore to himself that he would do his best to be able to touch the lives of as many people as possible using his great passions: teaching and baking.

Giuseppe is now baking from his Sourdough Microbakery and supplying small shops and private customers around the southern areas of Adelaide, he is also working as a baker, full-time, in one of Adelaide's elite supermarkets: Adelaide Finest supermarkets.

On his day off he also records videos for his multiple social media channels and runs hands-on workshops where he teaches how to successfully bake sourdough bread at home.

Giuseppe’s  Masterclasses are not limited to home bakers, he strives to share all the skills that he acquired in 20 years of working in the kitchens, matching a deep understanding of cooking and a passionate drive for sourdough baking.

As an Italian native, Giuseppe’s teaching methods, focus heavily on the cuisine of his motherland. His passion for food is palpable and his enthusiastic teaching approach is infectious and playful.

Giuseppe has recently started looking for a venue where he could scale his home business to something bigger, to be able to nourish a wider suburban area of South Australia and be able to run more masterclasses within the walls of his bakery.

Dreaming is free, remember it forever. 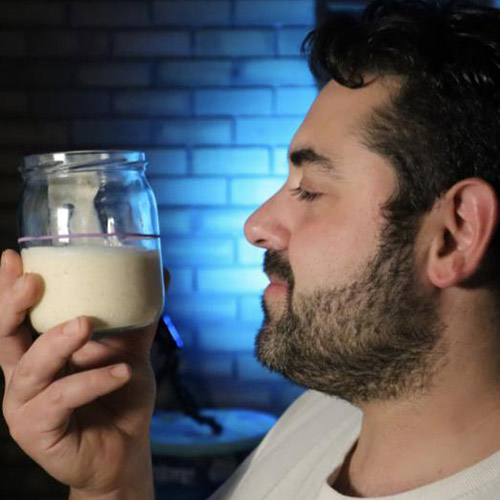